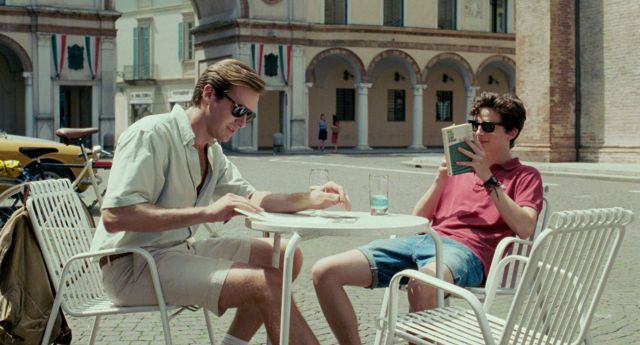 It’s a big night for gay literature. Call Me By Your Name – a gay coming of age movie based on the novel by André Aicman – is in the running for four Oscars tonight, including Best Picture.

While I’m thrilled to see a story about two men in love up for Academy Awards, I can’t help thinking back to Miz Cracker’s piece for Slate: Why has Call Me by Your Name attained such an iconic “gay” status when it is anything but? When its main characters seem almost aggressively isolated from gay culture or politics? When its precocious protagonist has to be reminded that it’s gauche to make fun of people who are openly gay?

It’s pretty peachy that James Ivory, an 89 year old out gay man, is expected to take home the Oscar for Best Adapted Screenplay for Call Me By Your Name. Catch up on the story of Ismail Merchant and James Ivory in The New Yorker.

I’m hoping Call Me By Your Name is one more call to publishers and producers to keep telling our stories. More diverse stories and stories by LGBT novelists with LGBT actors and actresses portraying us. More novels! More movies!

I read Call Me By Your Name back in 2007, shortly after it came out. “This novel is hot,” said The New York Times. Have you read it yet?